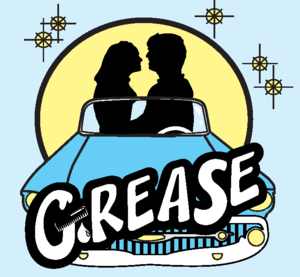 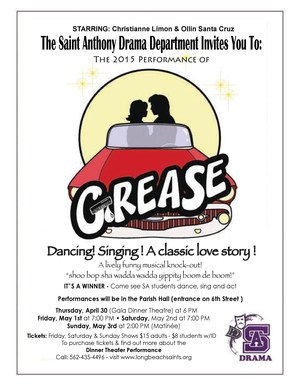 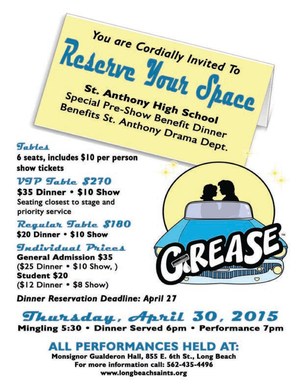 The Drama Department is happy to announce GREASE as their Spring Musical. Click here for more details.

Ticket prices:  $10 adult, $8 children/students.  The Thursday April 30 show is having a fundraiser dinner before the performance.  Individual tickets and tables are available for this show.

GREASE is a 1971 musical by Jim Jacobs and Warren Casey. Named for the 1950s United States working-class youth subculture known as "greasers" the musical is set in 1959 at fictional Rydell High School and follows ten working-class teenagers as they navigate the complexities of peer pressure, politics, personal core values, and love. The score attempts to recreate the sounds of early 1950's rock and roll  The school version is shorter and more suitable in content for teens and subteens, this abridged version retains the fun-loving spirit and immortal songs that make Grease a favorite among rock and roll fans of all ages.

Our drama department will be presenting the school version, which removes all profanity, lewd behavior, and Rizzo's Pregnancy scare. Since Rizzo's pregnancy scare is removed, the song "There Are Worst Things I Could Do" is also removed from this edition.  Lyrics from additional songs are changes in the school version, to make it more appropriate for a younger audience.

Grease was first performed in 1971 in the original Kingston Mines Theater in Chicago located in an old trolley barn. From there, it has been successful on both stage and screen, but the content has been diluted and its teenage characters have become less Chicago habitués and more generic. At the time that it closed in 1980, Grease's 3,388-performance run was the longest yet in Broadway history, although it was surpassed by A Chorus Line a few years later. It went on to become a hugely successful film, two popular Broadway revivals in 1994 and 2007, and a staple of regional theatre, community theatre, and high school and middle school drama groups.  It remains Broadway's 15th longest running show.