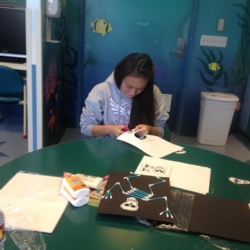 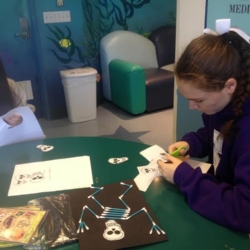 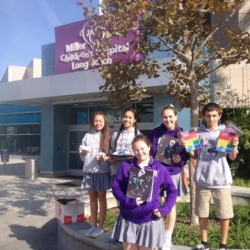 Five sophomore students visited Miller Children's Hospital on October 22, 2014 to play games and make crafts.
The sophomores who had the privilege to participate in the fifth visit to Miller Children's Hospital were Angeline Villegas, Melissa Gonzalez, Maddie Mizraji, Alex Stevens, and Emily Jackson.
The students brought craft materials to make skeletons out of q-tips and a box full of play dough, bubbles, crayons, and markers to the hematology, oncology and Starlight playrooms in the hospital.  There, Alex Stevens played video games with one of the patients while Emily Jackson and Melissa Gonzalez did the crafts together with other patients.  Maddie Mizraji and Angeline Villegas went to the Starlight playroom and did the skeleton crafts, colored Halloween pictures and talked about Halloween costumes with three girls who were between the ages of 8 and 13 years old.
This was another great experience for all--a parent of one of the patients even commented on how sweet Emily Jackson and Melissa Gonzalez were the kids in the playroom.